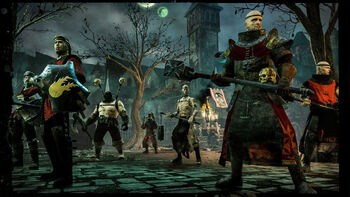 The Witch Hunters is an Order Warband.

The Orders of the Templars of Sigmar was founded in the early days of the Empire. Commonly known as Witch Hunters, these warriors root out evil where it hides among men. Depraved Chaos cults, hideous mutants, the abominable undead, witches and sorcerers practicing their black arts, even the insidious Skaven have been unmasked and destroyed by the zealous efforts of the Witch Hunters. To join the Order is to accept a dangerous way of life. Fear and mercy alike are qualities no Witch Hunter can allow within himself, only unwavering faith to Sigmar. These warriors have come to Mordheim to redeem it from its corruption - or see it purged in fire.

The Witch Hunters is a warband that possesses quite good versatility because of their compatibility with most weapons and armors. The Zealot is the henchman that can go ranged, but are only able to use drawn ranged weapons. Their skill increases their melee damage however and so synergize with being locked in melee combat. The Flagellant cannot use ranged weapons and are limited to only using cloth armor. This means they rely on agility for higher dodge chance, if they aspire to survive. They are fearless combatants, resisting terror with impunity.

The Templar Knight is a powerful parrying and melee resistance specialist for the Witch Hunters. If he can't parry the enemy, there's a good chance they will simply miss him, provided he is in combat with two enemies at once. Giving him a shield is a strong option, letting him protect less experienced or ranged characters by placing himself between the ally and the enemy with an ambush stance. He fears nothing, like the Flagellant. The Witch Hunter is an offensive powerhouse, enjoying a skill that lets him do more damage after every succesful attack. This doesn't stack but it counteracts tiring effects from two-handed weapons or simply lets subsequent one-handed melee attacks do more damage. He's very agile and has high accuracy but has poor leadership.

Warrior Priests are the spellcasters of the Witch Hunters. Their spells can mend wounds, stifle an enemy's offensive power or bolster an ally's defences. Outside of their spells, Warrior Priests are respectable combatants, being strong and tough but have poor agility, so they'll have to focus on parrying or using armor to increase their armour absorption. Witch Hunter Captains are the leaders of the warband, being elusive with their high dodge chance aided by their passive skill. They're versatile too, enjoying the ability to use a plethora of weapons. Both the Witch Hunter Captain and the Witch Hunter have a special perk that improves their magic resistance.

Executioners are interesting impressives since they do not employ fear or terror to inflict upon their enemies. Instead, they can throw a pyre onto the battlefield to embolden allies and himself. He can also set enemies alight with his attacks. Much like the other Witch Hunters, he can use many kinds of weapons. Notably, he's extremely agile, accurate and strangely enough, intelligent. Sadly, he cannot help with gathering wyrdstone or loot.

The special skills that the Witch Hunters have at their disposal are: