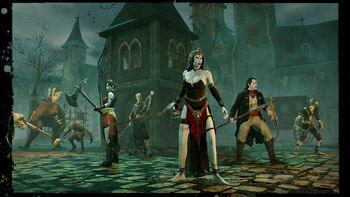 The Undead is a Destruction Warband.

On the borders of the Empire, beneath the World's Edge Mountains lies the forsaken county of Sylvania. Long a place of mystery and sinister doings, Sylvania descended into horror during the Black Plague when the necromancer Vanhel raised legions of the dead. Since that time, Sylvania has been a haunted land steeped in the darkest magic.

From the ancient castle of Drakenhof, Count Vlad von Carstein rules the county, but his ambition drives him to seek greater power. With the Empire consumed by civil strife, Vlad sees opportunity. The warbands he sends into Mordheim, the wyrdstone they gather for him, are but the first steps in the war the vampire lord will soon wage on his mortal neighbours.

The Undead are a gang with very high potential, and some very unique skill and perk access compared to other gangs. With the exception of the Necromancer and Dreg, the entire gang is immune to All Alone, Fear and Terror, and, apart from the Ghoul, Poison as well. This works very well against enemy warbands which might rely on these mechanics, notably Skaven and the Cult.

Their choice of henchmen is very unique, between the Zombie and the Ghoul, the Zombie being superior in almost every way, except for it's very poor movement range (4 metres) compared the Ghoul's 6. Zombies also have the unique ability of being immune to open wounds, helping against enemies with high crit chances. Although Undead gangs may have issues with their zombies starting in isolated parts of the map, the ghouls are not much better as they do not have shield access, making them incredibly vunerable. No other warband has such a varied choice in henchmen.

Like all warbands except the Cult, the Undead have one light combat hero, one heavy combat hero, and one spellcaster hero. The Dreg is strong, tough and has good weapon and ballistic skill. Humble Servant can be useful at low gang levels, but becomes fairly pointles at max level. The vampire thrall is similar, and causes fear as a nice bonus, as well as having poison, all alone, fear and terror immunity. The spellcaster hero, the Necromancer, is arguably the most powerful spellcaster in the game. Notably, he gets access to Call of Vanhel, an effective single target buff which, among other effects, increases the zombies' poor movement range, as well as 4 different damage dealing spells.

The Vampire Leader is very effective at lower ranks due to his ability to cause terror, however, the effectiveness can fall off slightly at higher ranks, where troops have better terror resistances. At any rank however, the vampire has high physical stats and movement range, which can both be useful. The Crypt Horror is a tanky impressive, similar to an ogre, but instead typically focuses on rapid movement and good dodge chances.

Overall, the Undead can be a very powerful gang, if played tactically. They also serve well as a counter to many gang builds.