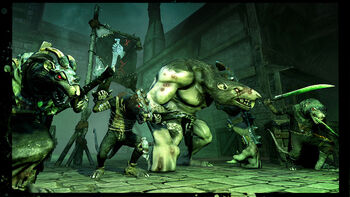 The Skaven of Clan Eshin are accomplished masters of stealth and murder. Long ago they learned the art of assassination in distant lands. Now they are among the most feared of the Great Clans of the Under-Empire. These silent killers serve as the eyes and ears of Skavendom, infiltrating the realms of other races and spying upon them from the shadows. Striking from ambush, utterly without mercy and honour, endowed with a ferocious speed and viciousness far in excess of any human, the Skaven are hideous foes. The chance to increase their own prestige inside the clan makes the warbands infesting Mordheim even more ruthless – and dangerous.

Effective use of a Skaven warband requires good use of tactics and an understanding of Skaven strengths and weaknesses. Skaven are generally fast and agile, making them one of the better factions for navigating the ruins of Mordheim, but they are also cowardly and physically weak. Skaven units will almost never fare well in one-on-one combat, even at high levels, and so it is vital for a Skaven player to keep their warriors together and gang up on enemies. Effective use of ambushes can give Skaven warriors the advantage they need, and where possible a Skaven player should always pick off isolated foes before engaging the bulk of the enemy warband.

In terms of combat, Warpguards and Black Skaven are the best picks for going toe-to-toe with the enemy, though Black Skaven with low experience levels can be surprisingly ineffective. Warpguards are the best choice for gathering Wyrdstone, as they have an innate resistance to its negative effects. Verminkin and the Assassin Adept are best used as skirmishers who stay on the edge of fights, taking advantage of their high mobility to outflank the enemy. Night Runners are even more effective at this as they gain a movement bonus after a successful Jump Down, and their higher health means they can be used to attack stronger enemies. The Eshin Sorcerer's powers are mostly debuffs, and so they are best deployed a short distance from fights where they can use their spells to even the odds against powerful opponents. Lastly, the Rat Ogre is a powerful melee unit but suffers from Stupidity, so they are best used in tandem with the Eshin Sorcerer whose Guidance ability negates this effect.