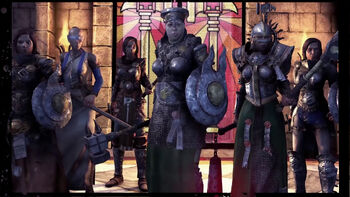 The Sisters of Sigmar is an Order Warband.

The Rock lies in the middle of the River Stir in the southern part of Mordheim. More fortress than convent, the Rock has survived the devastation wrought by the comet and provided a refuge for the Sisters of Sigmar. Branded witches and worse by the broader Cult of Sigmar because of their miraculous deliverance, the Sisters maintain a fervent devotion to their god. They seek to prove themselves and redeem their order by cleansing Mordheim of the many evils that beset it and locking away the tainted wyrdstone where its corruption cannot spread. Armed with faith and warhammer, the Sisters stand ready to oppose all who would defy them.

Sisters of Sigmar have a number of strengths that make them a very effective warband on the battlefield. They are generally hard-hitting, all units coming equipped with hammers, maces or flails, and their base toughness levels are fairly good as well which means that in a straight fight Sisters of Sigmar will often come out on top. The Sister henchman unit hits hard even before gaining any experience bonuses, and while Novices are weaker they are easier to adapt for different fighting styles. Most Sisters of Sigmar Hero units are powerful melee fighters, with the Sigmar's Purifier particularly well-suited to making devastating charges. The exception is the Augur, who is best used in a scouting/support role until she gains some experience.

Sisters of Sigmar have high morale levels, making them one of the harder factions to Rout, and more importantly they have the best access to magic of any faction. The Sigmarite Matriarch, Sigmar's Purifier and Maiden of Sigmar all have access to a number of spells, which are mainly support-oriented buffs that will enhance the warband's power. The faction's one significant weakness is their complete lack of ranged weapons, making the Comet of Sigmar spell their only option for damaging enemies they are not in contact with. In general Sisters of Sigmar are a strong faction that will bring beginner players some easy victories but have limitations that make them less attractive to those who prefer a flexible play style.