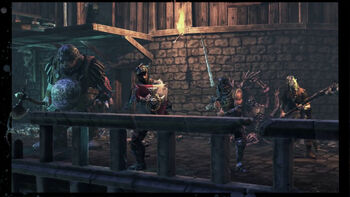 The Human Mercenaries is an Order Warband.

The province of Reikland lies at the heart of the Empire and is a land long renowned for the discipline and loyalty of its people. Warriors drawn into the service of Reikland are held to a high standard of professionalism, eschewing the flamboyance of other provinces. For a Reiklander, sturdy armour and a reliable sword are more precious than silks and jewelled vestments. Grand Prince Siegfried of Reikland claims the vacant Imperial throne for himself, and the warriors of his land will do their utmost to see him crowned Emperor. Even if they aren’t above making some coin for themselves in the process. A Reiklander is always pragmatic.

The Mercenary warband is a good all-around list, including average-good melee and ranged fighters, in combination with a powerful arcane spellcaster and a tanking Impressive unit. The Mercenaries are ideal for a starter warband thanks to the broad equipment selection, which allow easy strategy customization. The strong elements of the warband as of version 1.0 are the marksmen, which are among the most effective non-hero ranged unit in the game so far. Thanks to the variety of equipment available to the warband, the strategy can be customized ranging from extensive use of slow but powerful blackpowder weapons, to fast shooting bows useful for hit-and-run tactics. Ranged weapons are available to all members of the warband, excluding the Ogre Mercenary.

The large availability of ranged weapons is offset by average resistance of units. All members of the warband highly rely on armor and defensive skills to effectively reduce the amount of damage received, and are otherwise highly vulnerable.

Distinctive units of this warband are the Warlock, a very effective spellcaster with average melee and ranged combat capability, even though limited in the use of armors by the arcane nature of his spells, and the massive Ogre Mercenary. The Ogre is a fearsome opponent for any warband, featuring massive amounts of hitpoints and armor. The tanking capability of the unit is matched by the very high single-blow damage output. The Ogre however has very limited mobility compared to almost all other units in the game.