From Mordheim: City of the Damned Wiki
Jump to: navigation, search

The game is set in the Empire city of Mordheim, from Imperial Year 1999, some 500 years before the present day in the Warhammer World time line.

The Empire was a place torn: it had been in civil war for years – there was no Emperor sitting on the throne, and various powers were vying for control. In the Imperial year 1999, a great comet was sighted in the sky – a twin tailed comet, the sign of Sigmar.

Astronomers predicted that it would fall in the city of Mordheim, where his convent of Sisters stood. It was believed that it would herald the return of Sigmar, which he would restore the land to its former glory and usher in a new golden age.

Everybody traveled to Mordheim, filling the city well beyond its capacity. Such were the times that lawlessness soon grew out of hand.

The citizens of Mordheim quickly degenerated to moral debauchery, giving themselves over to their own worldly temptations, living in an increasing state of anarchy. 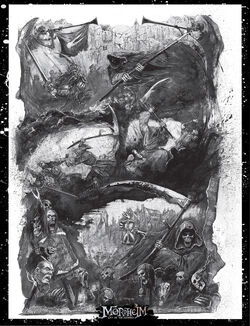 As time drew closer to the comet's arrival, more and more people made the journey to Mordheim, and the situation became unbearably worse.

As people gave in to acts of depravity, demons walked the streets like men, the seeds of Chaos and corruption long since having claimed the souls of the pitiful thousands who now called Mordheim their own.

The comet fell on the first day of the new era, but it was not to be the coming of Sigmar as predicted. It smashed into the city, instantly killing those who had gathered around it. Word got out that Sigmar had passed his judgment, that he had smote those who he deemed unworthy.

The place of Mordheim became a place of fear and paranoia. Soon after, word spread of a mysterious stone that lay scattered about the city, known as Wyrdstone, which had all manner of reputed qualities.

It was discovered that factions would pay incredible amounts for this precious stone, whatever their motivation. So Warbands began traveling to Mordheim, now dubbed The City of the Damned, hoping to find this precious stone and make their quick fortunes...