Cult of the Possessed 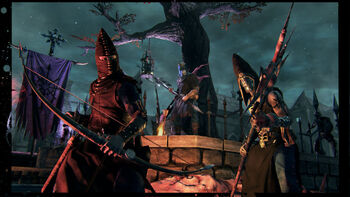 The Cult of the Possessed is a Chaos Warband.

Mordheim has become a lawless, blighted place, far from the authority of temples and noble lords. The malignant clutch of Chaos hangs heavy over the ruins, changing those too desperate or too stubborn to leave, drawing to it creatures already twisted by mutation and corruption. Groups of these degenerates and mutants gather together into the Cults of the Possessed, seeking to gain the favour of the Shadowlord by returning the wyrdstone to the Pit and slaughtering all those they find trespassing upon their master’s domain – the City of the Damned. The inhuman, the subhuman and the nonhuman all gathered into the dark embrace of madness.

A very disorganized but potentially very powerful warband, the Cult of the Possessed is unpredictable to both play and fight. The Brethren form the ranged warriors, specializing in overwatch stance to foil enemy strategy points. Their accuracy is incredibly high for a henchman. Darksouls are veritable hulks of melee combat, ignoring being caught alone, fear and even terror. They are mostly offensively oriented but can make passable guardians for the other members of the cult.

Mutants are the basic mutation-using heroes that can be molded to your choosing and are the most versatile warriors in the entire warband. Highly agile and skilled in both melee and ranged combat, they are filled to the brim with potential. Their passive skill rewards them for eager acquisition of wyrdstone, making them more likely to perform critical hits afterwards. Marauders will prove useful with their charge-oriented passive skill combined with their strength and toughness. Aside from this, they enjoy great weapon skill and accuracy which translates into a seriously threatening melee fighter complemented by deadly or useful mutations. The Marauder is a mortal still, and so is prone to both fear and terror.

The last hero to benefit from mutations is the Possessed, who superimposes fear onto his enemies. Similar to the Marauder in terms of attributes, he does not specialize in any kind of area but is more than adequate as a melee fighter. Behaves like the Darksoul in the sense that he is wholly fearless. He is extremely limited in terms of equipment but has access to some special mutations the other heroes cannot obtain. The Magister is the sole spellcaster of the warband but has access to a variety of powerful spells. His passive skill promotes melee combat in order to empower his spell usage. Magisters are mentally oriented, having naturally high stats in that category but are unremarkable in other attributes.

Finally, the Chaos Spawn is the terrorizing impressive of the warband. Elusive, strong and a true juggernaut in combat, it can even be enhanced further through mutations specially available to only them and the Possessed. There are barely any choices when it comes to equipment but they can be specialized with clever use of skills and enchantments.

The special skills that the Cult of the Possessed have at their disposal are: